I have made the Boy Beanie by Laura Killoran a whole bunch of times, and I really love that pattern, originally in Stitch and Bitch.  Now there is the new and improved Boy Beanie V2.0 which I have now made twice and love equally, although, to be honest, its been awhile since I have done the original so I have no idea what is new and improved!  I love it because it is easily adjustable with hook size, the slouchiness, and the size itself.  I used the same pattern for Ty and for Ka’lani with two totally different results.

For Ty’s, I used a hook two sizes bigger than what was called for, but it was still too small, so I changed Rounds 6-7 to 2 more increase rounds, increasing by 10 stitches each round until 70 stitches. I wanted his hat to be nice and slouchy, so, instead of holding steady for just three rounds (7-9), I held steady through Row 18, then began the last 7-round stripe combination . Instead of sc, I did hdc for the colored stripes.  He loves it, with his requested Gryffindor-colored stripes!  The pics are clickable in a new window! 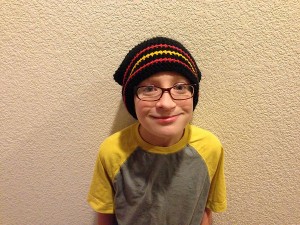 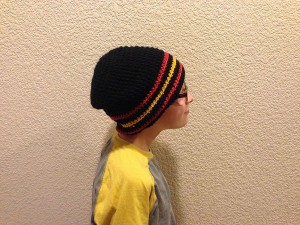 For Ka’lani, the pattern as it is written is way too small for him, so I used a hook 3 sizes bigger than the pattern called for.  I still needed to add more increase rounds, like Ty’s, so I increased in Rounds 6-7 to 2 more increase rounds, increasing by 10 each round until 70 stitches.  He didn’t want a slouchy version, but the traditional fitted one, but I still had to add an extra “hold it steady” round and used hdc instead of sc for the stripes.  I call it the “Frankenbeanie” because of the colors he chose!  The pics are clickable in a new window! 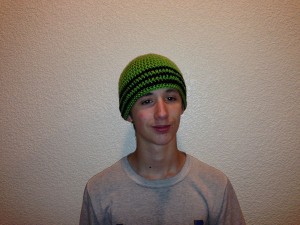 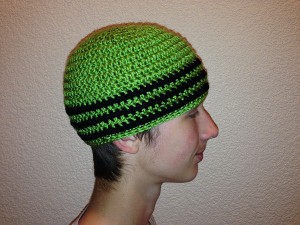 Scott wanted a different hat, so I did the Everyday People hat.  Originally, he picked a bunch of Red Heart SuperSaver colors from my stash, which felt like hell when just 6 rounds in.  Which I am grateful for because I hated his color combo!  I ended up buying different yarns in a different brand and in different colors and I love it now!  It’s an easy pattern, almost entirely done in extended single crochet.  I had never used this stitch before and, although it is easy, it makes the hat TIME COMSUMING AS HELL!  The pattern called for a sport weight (2) yarn, but I used a aran weight (4) and it was just fine.  The pics are clickable in a new window! 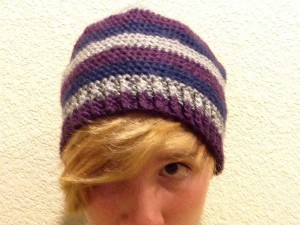 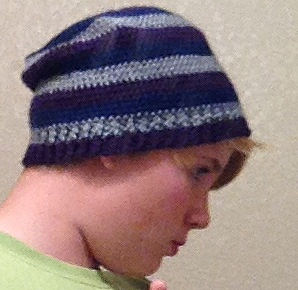 A little bit of shells and scallops…

I have seen a few patterns from openwork fingerless gloves, and tried a few, but I haven’t found one I really liked.  Usually they are either overly confusing, or the joins are pretty obvious.  So I designed my own!  I love them!  The pattern is free and available here or on Ravelry, the link on the pattern page.  This is all single crochet, chains, double crochet, and half double crochet.  Very quick and easy to work up!

The pics are clickable in a new window!

Pattern:  Shells and Scallops Hand Warmers by ME 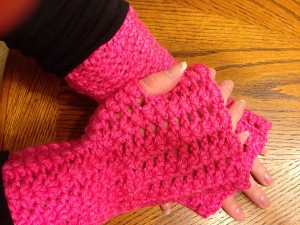 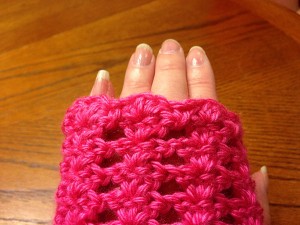