Today’s list is all about those people who have influenced us in some way.  It was interesting to look back and think about who those people are for me.

The pic below is clickable to see them full-size in a new window. 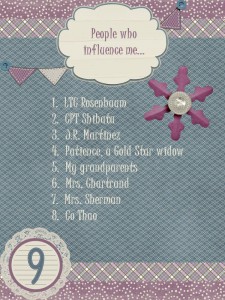 It is interesting to note that almost all of the people on my list are in some way related to the Army.  LTC Rosenbaum was my battalion commander at Schofield Barracks, Hawaii.  He was an amazing commander that I worked for.  He taught me what it really meant to be a leader, compassionate and still in a position of authority. CPT Shibata was my OIC in the same unit.  She taught me some invaluable skills that I carry with me and have taught to my own soldiers sine.  She also gave my second son his name that he still goes by, Ke Kumu’mau’o’ka’lani.  No, he doesn’t go by the whole thing, but Ka’lani.  J.R. Martinez is famous now, almost as famous for Dancing with the Stars as for anything else.  But before that, he was a soldier, gravely injured in Iraq.  His positivity is what influences me.  He has gone on and turned a horrific moment in his life as a way to bring awareness and hope to others and I admire that.  Patience is a friend, a friend who lost her husband to the war.  The way she carries herself in the years since have made her one of my heroines.  There is no question that my grandparents, both gone now, have been a huge influence on my life.  Mrs. Chartrand and Mrs. Sherman were my high school Latin and French teachers, the ones that instilled a love of languages in me.  They are the reason I joined the Army to go to the Defense Language Institute.  Co Thao was my Vietnamese teaher at DLI.  She was an amazing teacher and an amazing person.